Professional artist, Donna B, grew up without horses―a rarity in the equine art community. Instead, she created horses so she could experience them. Her work is full of her dreams and imaginings of the horses she never had. Through her art, she rides with them on an artistic journey.

Donna B drew and painted horses as a child because she felt spiritually connected to them, as if she had an intuitive sense of them. She studied them voraciously—their anatomy, form, and attitude. She watched horses intently at every opportunity. If she visited a farm, she would sit for hours and watch, “not wanting to draw at that time, for fear of missing something.” She would always go home later and draw from memory. Donna B explains that her imagination also played a great role. “That is why my stylized abstractive works reflect a non-realistic perspective, but with accurate anatomy,” she says.

I was determined to keep the colors simple in this monumental piece… just black, pink, and white. My vision was the feeling of a wonderful carousel, with horses moving in every direction, colorful, playful, and fierce, all at the same time―a modern carousel, if you will.

By keenly observing every horse she laid eyes on, Donna B memorized their nuances of movement and personality. Her art draws on this deep reservoir of imagery she has collected in her mind. “To this day, I might see a horse do something unusual, or be in a particularly pleasing or interesting pose, and I will remember it and recreate my minds vision of it in my art.” She explains that her work comes from “experiencing what a horse is, rather than trying to depict what a horse looks like.”

Full of movement, simplicity high style, and a designer quality, painted in gold and framed in gold. I felt strongly about an almost Asian ink-painting feel to this piece, and its subjective, abstract qualities.

When creating this piece, I focused on soft movement, a powerful feel, yet a generous look to the eye. As I completed the piece, I felt there was an energy that needed focus, and the element of blue came into play. Art is so intuitive. When I placed blue in the eye area, it became obvious that I needed it nowhere else; the feeling I was looking for had been achieved.

This is a large painting. I wanted to stretch myself, so I ordered a 5 x 8 foot canvas. I used oils and became fascinated by blending colors and creating ethereal space, as well as the suggestion of a horse and his shadow. That is why I call it “Tandem”―is it two horses, or only one?

Over the past 10 years creating as a professional artist, Donna B’s work has become unique, dynamic, and expressive of the horses’ energy, which she presents in a minimalist style that some have characterized as Asian or primitive. Often, each she plans each piece in her head; she never works from pictures, although she does voluminous sketching. “When I see it I begin it,” she says. “When it comes to the final piece, when I see it in my mind’s eye, I start to create it on the canvas.” Many of her works are large or life-size contemporary equestrian paintings. Her piece, “Carousel in Pink,” is painted across four canvas panels, each six feet high by four feet wide. Donna B also combines mediums in innovative ways that evoke movement and life. For example, “Eohippus” is a minimalist, contemporary piece, textured with ink and dry art media. It strongly resembles cave paintings, yet has a greater sense of movement and communication between the two horses pictured.

A mixed media creation, with the feeling of a painting you might find in an ancient cave, this textured work is both modern, prehistoric, minimalist, and complex. I love the feeling of the one-horse looking back at the other and the feeling of time and space. Eohippus is the name given to a prehistoric precursor of the horse itself―a smaller animal that had not yet developed hooves. The horse in the foreground reminds me of that ancestral animal.

Inspired by thoughts of how the horse has marched through history alongside man: as a warrior, a workhorse, a method of transport, an elegant agent of sport, a classic subject of art, poetry, culture, and style―I think no other animal has given so much to Man. Not to mention the horse is a symbol of freedom in the United States (but still wild mustangs are persecuted as you read this). Who has been a better patriot than the American Horse? And what better colors to convey that than red, white, and blue?

One of my favorite artists is Franz Marc, of Der Blu Reiter artist salons in early 20th century Europe. He loved to paint horses in full-color and often looking as if he saw them through a prism or a kaleidoscope. His work must be experienced; so colorful, abstractive, and ahead of his time. This piece is an homage to his unique and creative style.

Donna B’s artistic influence comes from several places. She explains that she “felt closely aligned with the ancient cave paintings: minimalist, primal, and intimate,” and the mythological history of the horse itself. As far as other artists, Donna B feels heavily influenced by Rosa Bonheur, a 19th-century woman who painted horses in amazing detail long before women were allowed to study anatomy (she would dress as a man to sketch horses in Paris parks). Bonheur’s piece “The Horse Fair” (1852) was seminal for Donna B. Also, Picasso, Pollack, Frankenthaler, Mitchell, Degas, and Monet—impressionists and originals—are some of her favorites.

Through her influencers and inspirations, Donna B has developed a signature style, easily recognized by clients and collectors for its movement, clarity of feeling, and a sense of intimacy. One client remarked, “her horses exist somewhere between heaven and earth.” She’s created a personal artistic blend, both modern and primal in structure, appealing to both the horse lover and formal art collector. See http://donnabernstein.com and www.donnabcollection.com for more information. 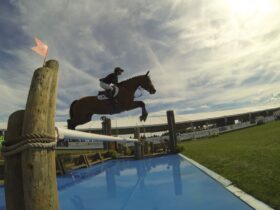 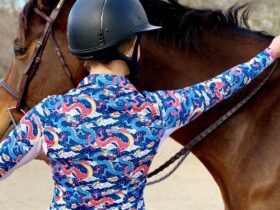 Building a Brand: Her Riding Habit 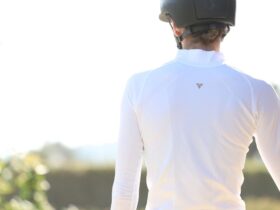 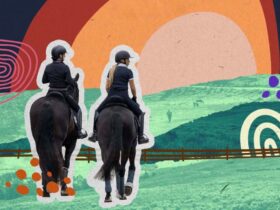 Building a Brand: Her Riding Habit

@tulucayfarms is a premier Hunter/Jumper barn located in beautiful Napa, California. Its owners, Brian and Missy Gruber, uprooted from their established show barn (and barn family) in Maryland to take over the west coast farm when Missy’s Aunt retired. Tulucay Farms has been in Missy’s family since its creation in the early 1980s, and that’s just one small part of how “family” is central to everything about the place. 🐴 𝗧𝗮𝗽 𝗼𝘂𝗿 𝘀𝗺𝗮𝗿𝘁.𝗯𝗶𝗼 𝗹𝗶𝗻𝗸 𝘁𝗼 𝗿𝗲𝗮𝗱 𝗺𝗼𝗿𝗲 𝗮𝗯𝗼𝘂𝘁 𝘁𝗵𝗶𝘀 ...